- February 14, 2020
Vrindavan is a historical city located in the Mathura district of Uttar Pradesh. It is one of the prominent places in the Braj land area. According to Hinduism, Lord Krishna spent his childhood days here. The city is about 10 km from Mathura, the birthplace of Krishna on the Agra-Delhi highway (Nh 2). Vrindavan Dham is dedicated to the worship of Radha and Krishna and hosts many temples. Vrindavan is considered sacred by Vaishnavism. Although Vrindavan Dham is visited by tourists throughout the year, but during Krishna Janmashtami, a large crowd gathers here to see Krishna's child pastures and tableaux. In this article, we will give you complete information about the journey of Vrindavan Dham and visit Vrindavan Dham. 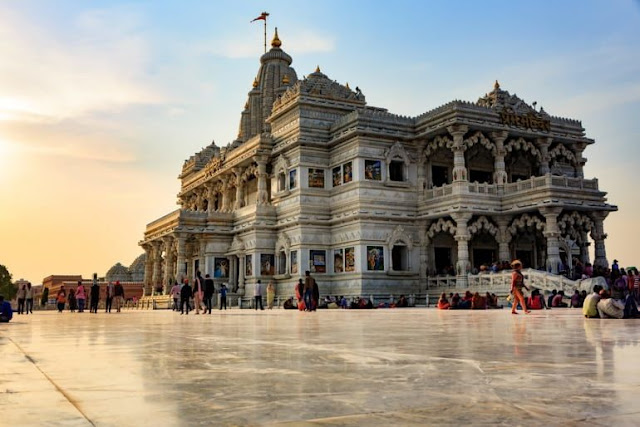 The ancient past of Vrindavan Dham is associated with Hindu culture and history. Vallabhacharya is believed to have come to Vrindavan at the age of 11. Later he preached three pilgrimage centers in India and went barefoot and preached Bhagavad Gita at 84 places. He used to stay in Vrindavan for four months every year. Thus his confirmation in Vrindavan greatly influenced the people.

The essence of Vrindavan began to become extinct by the 16th century, when it was rediscovered by Chaitanya Mahaprabhu. In 1515, Chaitanya Mahaprabhu traveled to Vrindavan with the aim of locating the lost holy places associated with the above-mentioned past of Lord Krishna. It was believed that by his divine spiritual power, he was able to explore all the important places of Krishna's past in and around Vrindavan. After this Meerabai also left Mewar state and came to Vrindavan. Thus Vrindavan Dham is famous for its ancient history.

2. Some interesting facts about Vrindavan


3. Places to visit in Vrindavan

It is a city where thousands of small and big temples are located. Tourists keep coming here throughout the year. Let us know which are the places to visit in Vrindavan.

This temple located in Vrindavan is one of the most revered temples in the country dedicated to Lord Krishna. The temple is built in Rajasthani style and the image of Lord Krishna in the temple appears as a child. Whenever you go to visit Vrindavan, do not forget to see the Banke Bihari temple.

This grand religious temple located in Vrindavan is dedicated to Radha Krishna and Sita Ram. Built of white marble and adorned with very intricate carvings, this temple is also famous for its architectural beauty. Whenever you go to visit Vrindavan, do not forget to see the Prem Mandir.


It is also known as Sri Krishna Balarama Temple. This temple was built in 1975 on the instruction of Bhaktivedanta Swami Prabhupada. This magnificent temple located in Vrindavan is worth visiting. Whenever you visit Vrindavan Dham, do not forget to visit ISKCON Temple.

This temple was built in 1542 by Gopal Bhatt Goswami. Radha statue is not present in this temple, only a crown placed near Lord Krishna shows Radha. While traveling to Vrindavan Dham, do not forget to visit Shri Radha Raman Temple.

The temple is dedicated to Lord Shiva and the god is depicted as a gopi. Devotees pour holy water of Yamuna on Shiva Linga here. This temple is worth seeing in the temples of Vrindavan Dham.

Shahji Temple was built in the year 1876 by Shah Kundan Lal. It is dedicated to Lord Krishna. The main deity of this temple made of marble is known as Chhota Radha Ramana.

The temple is dedicated to Lord Vishnu and his consort Lakshmi. It is one of the largest temples of Vrindavan and is surrounded by high walls.

The Katyayani Peeth Temple is one of the 51 Shakti Peethas and is known as Uma Shakti Peeth. It is located within the Bhuteshwar Mahadev Temple in Vrindavan. This temple is worth seeing in the temple of Vrindavan Dham

Apart from this, there are many places to see in Vrindavan. Places such as Sri Radha Damodar Temple, Madan Mohan Temple, Pagal Baba Temple, Kusum Sarovar, Barsana, Seva Kunj, KC Ghat, Jaipur Temple, Yamuna River, Sri Vrinda Kund etc. can be seen. If you are fond of puja lessons then visiting these places in Vrindavan can be quite pleasant.


Vrindavan is one of the most visited pilgrimage places for Hindus. The weather here remains the same as in the rest of North India. Vrindavan is considered the best time to visit during January to March and October to December. The weather during these months is gentle and pleasant and is an ideal time to visit the sights of Vrindavan.


5. How to reach Vrindavan

6. How to reach Vrindavan Dham by plane

The nearest airport to Vrindavan is Kheria Airport in Agra which is located at a distance of 53 km from Vrindavan. This airport is connected by air to major cities of the country. After reaching here you can reach Vrindavan via bus or taxi.

7. How to reach Vrindavan Dham by train


There is no railway station in Vrindavan. The nearest railway station is at Mathura, which is located 10 km from Vrindavan. Regular trains run to Mathura Cantt and Mathura Junction. After reaching the station you can reach Vrindavan Dham by taxi or motor rickshaw.


8. How to reach Vrindavan Dham by bus


There is no bus route directly to Vrindavan from the major cities of the country. The nearest bus stand here is Mathura, which is 10 km from Vrindavan. Here you can come by bus from Delhi. Apart from this, Bharatpur and Rajasthan are 45 km from Mathura from where regular buses come. Mathura bus stand can also be reached through this. One can then go to Vrindavan by auto rickshaw or taxi.


9. Where to stay in Vrindavan

Since Vrindavan is always crowded with tourists due to Braj land, there are many options to stay here. There is a hotel as well as a guesthouse where tourists and pilgrims can relax.Vrindavan has Kridha Residency The Boutique Hotel, Hotel Santosh Dham, Vrinda Palace Seva Dham, Hotel Basera Vrindavan, Hotel Geet Govind, Hotel Dev Residency etc. These hotels have all kinds of facilities. Apart from this, pre booking is also done here. You can make a booking as per your convenience.

Click here and Find your  >>>>   best hotel in vrindavan

Vrindavan was a forest area in ancient art and Nidivan is a forest of trees whose trees always live green where Swami Haridas, the Guru Vaishnava saint of Tansen, had revealed the Radha-Krishna couple with his hymns. Radha-Krishna Vihara used to live in this forest.The miraculous miracle of the forest is that Radha-Krishna's bed is laid in a temple room here and the stuff of Sri Radha's adornment is kept. The room is closed at night. In the morning, when this room is opened, the bed is found in disarray and the dressing is used. There is also the tomb of Swamiji.