Information about the hill fort of Rajasthan 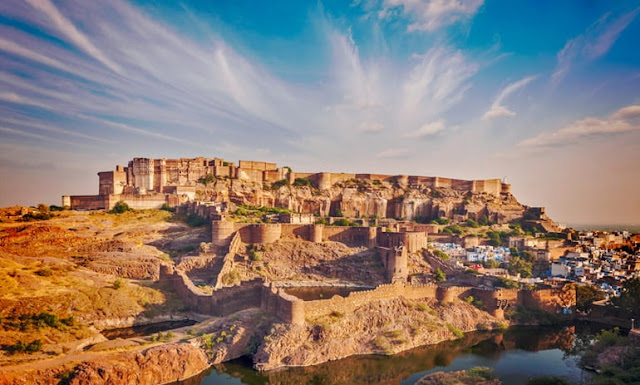 Rajasthan is one such state of India which is known as the land of kings. Rajasthan is the largest state in India, which was formerly known as Rajputana. Rajasthan was divided into various regions, which were ruled by several clans.The clans ruling here included the Meena, Gurjar, Rajput and Jat rulers, who got various constructions and development done in Rajasthan. All these rulers were responsible for building various historical monuments in the state and Rajasthan has got rich cultural heritage from many monuments and forts built by them.The main monuments of Rajasthan include several hill forts, most of which are located in the Aravalli mountain range and were constructed between the 5th century AD and the 17th - 18th century AD.

These hill forts are a wonderful piece of architecture in Rajasthan for a long time. There are 6 such hill forts in Rajasthan which are major tourist attractions in Rajasthan. Each of these forts has a unique beauty that attracts people towards it. In this article, we are going to tell you about the major hill forts of Rajasthan.

In this way, there are about 24 forts in entire Rajasthan, but when we talk about the hill of Rajasthan, there are only 6 such forts in Rajasthan which are situated on the hill.

1.2 Kumbhalgarh Fort is built on a hill in Rajasthan

Kumbhalgarh Fort is a major hill fort of Rajasthan located at the foothills of the Aravalli ranges and surrounded by thirteen mountain peaks. Kumbhalgarh Fort is one of the 6 hill forts in the state of Rajasthan situated amidst a forest at an altitude of 1,914 meters, which has now been transformed into a wildlife sanctuary.
It is the second largest and most special Mewar fort in Rajasthan after Chittorgarh palace. Which can attract anyone to himself. Explain that in 2013, Kumbhalgarh Fort was declared a World Heritage Site by UNESCO. Kumbhalgarh Fort has about seven gates and a total of 360 temples, of which 300 are Jain and the rest are Hindu temples.

1.3 Ranthambore fort is built on top of hill in Rajasthan

Ranthambore Fort is included in the hill fort of Rajasthan, which belongs to the Chauhan royal family located in Ranthambore. This fort is situated on a large rock in the middle of Ranthambore National Park and is included in the list of World Heritage Sites by UNESCO. The Ranthambore Fort is surrounded by large walls with many stone gates and staircases leading to the top of the fort.Ranthambore Fort's large gates, pillars, domes, palaces, temples are its major attractions that fascinate people with its Rajasthani architecture. If you are planning to go on a trip to Rajasthan, then definitely include this hill fort of Rajasthan in your travel list.

1.4 Gagaron fort in the hill fort of Rajasthan

Gagaron Fort is located in the Jhalawar district of Rajasthan, which is one of the outstanding examples of Rajput architecture. Gagaron Fort is a hill fort in Rajasthan as it is built on the top of the hill and offers a spectacular 360 degree view below. In addition to a museum outside the gate of Gagaron Fort, the tomb of Sufi Saint Sweet Shah is also located.Towards which the local people have great reverence. Every year during Muharram, it is found here in honor of Sufi Saint Sweet Shah. This fort is the main center of tourist attraction due to its beautiful architecture, strong walls and royal aura. In June 2013 Gagron Fort has also been included in the UNESCO World Heritage Site list at the 37th meeting of the World Heritage Committee.

1.5 Amber Fort situated on the hill of Rajasthan

Amer Fort is a major hill fort of Rajasthan which is situated on the top of the Aravalli hill. This Adbhud fort is very popular due to its architecture and history. This fort is located at a distance of 11 km from Jaipur and is constructed with pink and yellow sandstones. Amer Fort is so famous That more than five thousand tourists come to see this fort every day. This hill fort of Rajasthan is a paradise for both tourists and photographers. The Amber Fort was built in 1592 by Maharaja Man Singh I, one of Akbar's most trusted generals. This fort has been the main residence of the Rajput rulers. Amer Fort has been included in the UNESCO World Heritage Site list as "Hill Fortress of Rajasthan" along with 6 other forts.

Jaisalmer Fort is a fort on the golden sands of the Thar Desert, a mill town with its own homes, temples, shops and restaurants. The Jaisalmer Fort was built in 1156 which derives its name from the erstwhile Bhati Rajput ruler Rao Jaisal. This fort, included in the UNESCO World Heritage Site, comes in the list of Hill Forts of Rajasthan.Jaisalmer Fort, situated at an altitude of 250 feet, is surrounded by 30 feet high walls. Jaisalmer Fort is one of the largest forts in the world, also known as 'Sonar Fort' or 'Golden Fort'. The Jaisalmer Fort was initially named 'Trikuta Garh' as ​​it was triangular in shape and was also built over the Trikuta hills.

Information about the hill fort of Rajasthan