While Veer Prasuta is a resident of Rajasthan, many pride stories are included in his area, but the main center of faith, Khatu, is unique in itself. 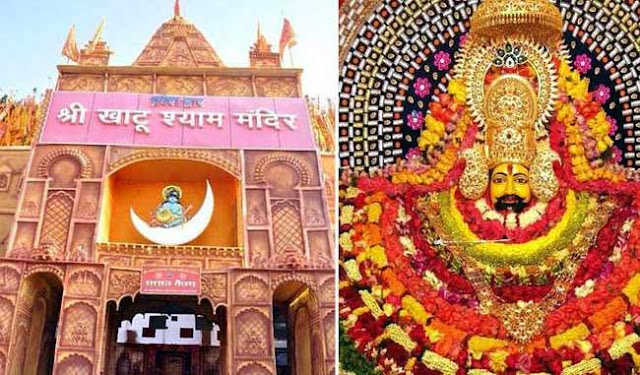 Paramdham Khatu is located in Sikar district of Shekhawati. Khatu Shyamji, the Kalyugi avatar of Lord Krishna, is enthroned here. Devotees who are saying the glory of Shyam Baba are present not only in Rajasthan or India but in every corner of the world.

The Shyam temple of Khatu is very ancient, but the foundation stone of the present temple was laid in the year 1720. According to historian Pandit Jhabarmall Sharma, in 1679, Aurangzeb's army destroyed this temple. At that time many Rajputs gave their life to protect the temple.

Every year Phalgun Mass fills a huge fair here in Shukla Paksha, in which devotees from all over the country and abroad arrive. Thousands of people reach here on a padyatra, while many people make obeisance to the court of the King of Khatu. According to Ramchandra Chejara, a shopkeeper here, lakhs of devotees come to the fair filling from Navami to Dwadashi. There are long queues of devotees on every Ekadashi and Sunday too.

Aarti is performed in five stages in Khatu temple - Mangla Aarti at 5 am, Dhoop Aarti at 7 am, Bhog Aarti takes place at 12.15 pm, Sandhya Aarti at 7.30 pm and Shayan Aarti at 10 pm. There is a slight change during this time of summer. The temple gates are open 24 hours on the occasion of Shyamji's birthday on Kartik Shukla Ekadashi.

By Road: Taxis and jeeps are also easily available from the Khatu Dham to Jaipur, Sikar etc., along with Rajasthan State Transport Corporation buses.

Air: The nearest airport is Jaipur, which is situated at a distance of about 80 km from here.

Places of interest: Shyam Bagh and Shyam Kund are major tourist spots in Khatu Dham for the Shyam devotees. There is a feeling of natural environment in Shyam Bagh. The tomb of Aalusinh, a devotee, is also built here. It is believed about Shyam Kund that bathing here cleanses the sins of the devotees. Separate pools have been built here for bathing of men and women.