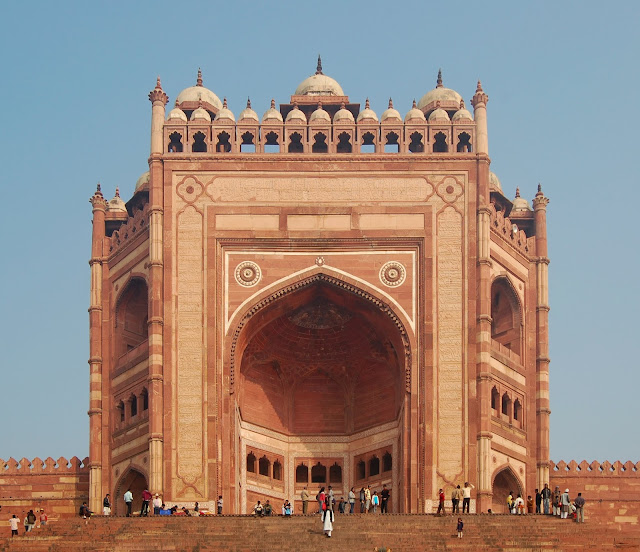 Fatehpur Sikri is located in Agra district of Uttar Pradesh. From 1571 to 1585,Mughal emperor was the capital of India during the reign of Akbar.

Later, because of lack of water, they left for Agra Fort.When he defeated Rana Sanga in Khanva 40km away from Agra,then Akbar made his headquarters at this place and named him Fatehpur SikriAkbar had no children. Salim was born on the blessings of Sufi saint Salim Chishti,Which later became known as Jahangir.

Then in 1571 Akbar made the dargah of Salim Chishti, where people still come to demand vows.The highest building in this place is the BULAND door,its height is 280 feet from the ground.To go inside, the person has to cross 52 stairs.This is Indias biggest door.In 1602 AD the Buland Darwaza was constructed by Akbar as the monument of victory over his Gujarat From this door, people go to Sheikhs Dargah. Fatehpur Sikri has in many palace, large rooms, and masjid.It is also recorded in UNESCO World Heritage Site.This historic building is a classic example of Gujarati and Bengali architecture.Thousands of visitors come here every day,And see the Naubatkhana,Where all people were told on the arrival of a special guest during Akbars reign.here is a diwane-e-khas, which was for personal and special people.here is also a diwane-e-khas, which was for general people,

Where Akbar used to talk to the common public.You can also see Birbals house in Fatehpur Sikri, he is Akbars main minister and his story is famous all over the world.