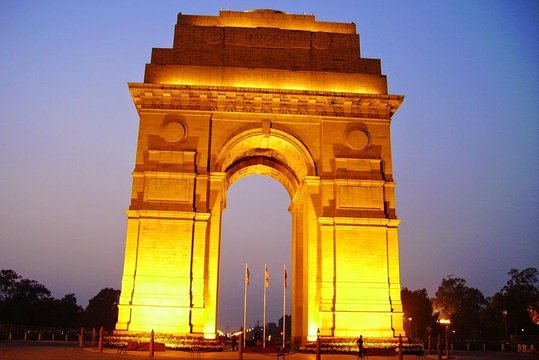 Delhi is a lot more than just the capital of India.It is the city of love.It is an absolute combination of traditional values and modernity.Delhi tourist places include historical and modern monuments on one hand and a world class airport and metro on the other.Street food shopping malls, religious places, pubs, world class hotels, theatres, and pubs you name it and Delhi has it all.In todays Delhi tour I will take you around 15 most amazing places to visit in Delhi which every should visit at least once.Before we continue please press the subscribe button to get the latest posts.

Top most place in Delhi is India gate.India gate defines old Delhi.It was built in 1931 as a memorial for the martyrs of world war-1.And was also called all India war memorials.It looks its best at night when all the evening light brightens the area to a significant amount.

This fort is managed by the Archeological Survey of India and was declared a UNESCO World Heritage Site in 2007; The fort became famous ever since Jawarhar Lal Nehru delivered a midnight speech right before India was going to wake up to witnessa sunrise of independence from British rule.

It is famous for its spiritual and cultural field which is amazingly built and is wellpreserved.The temple has a huge architectural structure which is 141 foot high and 316 foot wide andis very famous among tourists from all over the place who come to witness this charming place.The evening light and sound show is a must visit for every visitor.It is situated in South Delhi and is emerging as the most famous tourists spot in the city.

With so many things to offer this place is gaining a lot of popularity.It is also known as mehak ka chota quila.It is a valuable structure of the country and is a part of Qutab Complex which was declaredas a UNESCO World Heritage Site.It is entirely made of red sandstone and marble and reaches a height of Up to 72 meters.

It consists of 5 stories and has 379 steps in total.Popularly known as CP this place has a lot of shops, markets, buildings and hotels.Many Bollywood movies are also shot here.Gurudwara Bangla Sahib is known for its association with their eight guru, Guru Har Krishna Ji.It has a complex structure with a beautiful pool inside known as Sarovar.

The Lotus temple is a major landmark of the city that attracts tourist from all over theglobe due to its beautiful architecture and magnificence.It is constructed in such a way that it resembles a lotus flower.It can accommodate approximately 2500 people at a time.

It is a Bahai House of worship so people of any religion can visit this temple and worship.It is the residence of the President which was earlier known as Viceroy’s House.It is entirely of 130 hectares that has Mughal Gardens, open spaces, office staff and other royal stuff.This house consists of four floors and 340 rooms which are constructed with great interiors,using the best things possible.

It is one of the largest mosques in the country and was built by Mughal Emperor Shah Jahanbetween 1644 and 1656.It is surrounded by three gates and four towers.It can accommodate more than 25000 people at a time.The Masjid is now protected by Delhi Waqf Board.

It is a vibrant market that provides every item in your list.The market design was done by Shah Jahan’s daughter Jahanara.It is considered to be the largest wholesale market in Delhi.Moonlight Square is the English name of this place.The land of this museum is spread over 10 acres.The visitors come here for a toy trainride and apart from this there are a lot of items on display which attracts tourists eyes.

It is located in NCR Delhi near the Leisure Valley Park.It is an entertainment and a leisure spot where people come to enjoy an evening andde-stress themselves.Dilli Haat is a venture of Delhi Tourism and Transportation Development Corporation.It is spread over an area of 6acres and is now transformed into a plaza.Apart from shopping at present it is also a venue of crafts, music, dance and culturalevents held by different organizations.

Purana Qila also known as Old fort is the oldest fort in Delhi.It was made by Sher Shah Suri.There is a daily sound and light show that happens after sunset which talks about thehistory of the seven cities of Delhi.Here we sum up the top 15 places to visit in Delhi.
Call For Booking - 9571713456
Delhi City Tour